Chapter members Alesia Strauch, Kevin Blair, Lisa Robertson and Karen Eddleman traveled to Anchorage in June to attend the IRWA’s 63rd Annual International Education Conference. Chapter 2 was a finalist for the Chapter of the Year award, competing against Chapter 1 (Los Angeles) and Chapter 11 (San Diego). Alas, the award went to Chapter 1, but it was an honor to be recognized, and we’ll strive for next year! Karen Eddleman was also a finalist for Instructor of the Year, and although she didn’t bring home the trophy this time, she’s golden in our book! 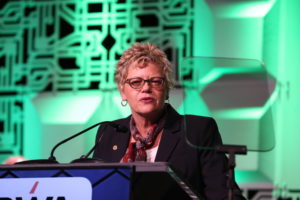 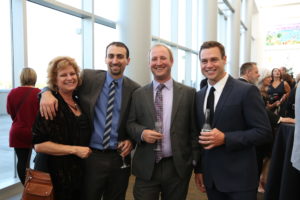 A number of Chapter 2 members attended the International Right of Way Association’s 62nd Annual International Education Conference held at the Gaylord Opryland Hotel in Nashville, Tennessee. Region 1 (pictured below) was well represented as well as Chapter 2. Each day was dedicated to orientations, meetings, educational sessions, mixers, and award ceremonies. Members took advantage of the many educational and learning opportunities, as well as the networking events. 1,400+ Right of Way professionals were in attendance to take in the over 40 education sessions presented by seasoned subject matter experts in 12 disciplines. Below are some pictures of Region 1 and Chapter 2 members enjoying the Education Conference. 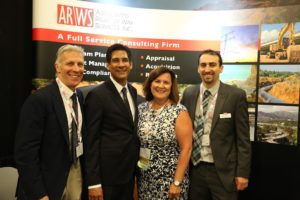 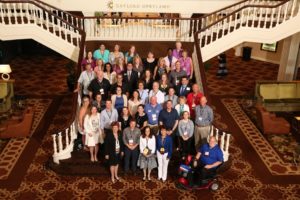 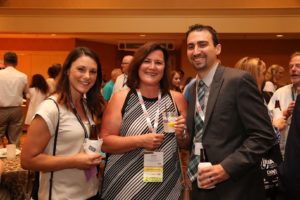 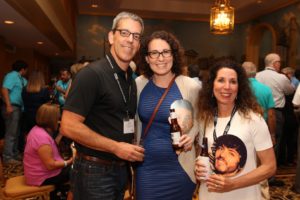 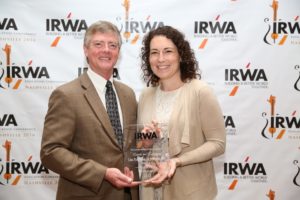 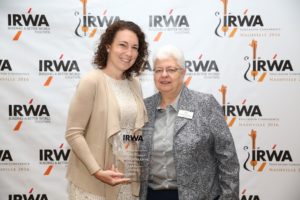 The 2016 Region 1 Spring Forum was in Berkeley on March 19th. It was a gorgeous day to conduct business at the David Brower Center (pictured below). We had a busy day of updates, questions and networking with representatives from Headquarters, our Region 1 reps and Leaders from all the Chapters within Region 1 (CA, NV, and AZ). Chapter 2 members later joined at the Beta Lounge in Berkeley for a Happy Hour and Member Appreciation Event. Thank you to all of those in attendance!

Our International Bylaws are currently under a comprehensive review with the purpose of clarifying, simplifying and modernizing our International Bylaws.   The main update may include a possible scaling down of Membership Categories from a long list to: Student, Retired-Active, and Retired Non-Active. There will be a difference in membership prices for the categories. Based on feedback from the Regions, this change may move forward to present resolutions at the June Board of Directors meeting to be held at the Annual Conference. We will keep you updated as this change comes to fruition.

The Credentialing Committee has created a streamlined process to the Industry Paths. New Industry Pathways for SR/WA, RWP, and RWA are now available online. If you have any questions, please contact our Chapter Professional Development Chair, Steve Castellano.

2016 Region 1 Fall Forum will be held in San Diego October 14-15, 2016 at the Bahia Resort Hotel. All members are welcome to attend these bi-annual Region business meetings.

The 2016 Annual Educational Conference is June 12th-15th in Nashville, Tennessee. Greg Rinehart and I will be attending to represent the Chapter. A list of educational sessions is now available online, so sign up now before the prices go up. It was announced that the host hotel is sold out at this time.

REPORT FROM HARTFORD, by Gale Connor

In June, Lisa Hiddleson and I attended the 60th Annual International Education Conference, held this year in Hartford, Connecticut. There were over 1,000 attendees from chapters all across the United States, Canada, Nigeria and South Africa. In addition, we were joined by right-of-way professionals from Mexico, Uganda, Germany, Saudi Arabia, Japan, Belgium and the Netherlands.

The educational offerings were as diverse as the attendees. Sessions covered such bread & butter issues as valuing contaminated properties for litigation; corridor valuation; emergency relocations of residences and businesses; and Surveying 101. Other sessions drew upon both North American and international perspectives. By way of example, the encroachment roundtable included speakers from Saudi Arabia and South Africa. Still other sessions tackled overseas issues. Among the topics were UK Megaprojects; acquiring rights on state owned land in South Africa; Southeast Asia real estate markets and appraisal opportunities and, Lisa’s favorite, managing the complexities associated with underground utilities in Germany, Belgium and the Netherlands.
Although billed as an education conference, the gathering in Hartford afforded an opportunity for the IRWA Board of Directors to hold its annual business meeting. Among the issues before the Board was a dues increase. After some discussion, the Board adopted a resolution increasing dues over a two-year period. Beginning with the 2015 dues billing cycle in November 2014, annual dues will be increased for active and senior members to $215 and $230, respectively. Then, in November 2016, dues will again be increased for active and senior members to $225 and $240. Also adopted was a resolution making technical amendments to the International Bylaws.
The host city for the 2019 International Education Conference was also selected. This process proved to be surprisingly difficult. In the running were Las Vegas, Minneapolis and Portland. After two rounds of voting, Las Vegas dropped out. For the next three rounds, the vote tally was 50% Minneapolis and 50% Portland. Not until the 6th round did Portland finally emerge victorious. For those who like to plan ahead, here are the locations of the upcoming conferences: San Diego (2015); Nashville (2016); Anchorage (2017); Edmonton, Alberta (2018) and Portland (2019). A bit closer to home, we in Chapter 2 will be hosting the Region 1 Spring Form in 2016, location TBD.
There was also a changing of the guard in leadership at Hartford. In Region 1, we welcomed our incoming Chair, Janet Parks, and offered our thanks to outgoing Chair, Vivian Howell. Internationally, Lisa Harrison passed the torch for International President to Lee Hamre. Jeffrey Jones (Region 5 Chair) was elected IRWA International Secretary.
Onward to San Diego.

PSEP 101: What Everyone Should Know About PG&E’s Gas Transmission System Improvements, article by Keith Winn
PG&E’s Pipeline Safety Enhancement Plan (PSEP) is a rigorous and comprehensive multi-year gas transmission system overhaul that incorporates lessons learned from the San Bruno accident, findings of the CPUC’s Independent Review Panel, benchmarking results against other natural gas transmission providers, and input from policy makers, stakeholders and regulators. When completed, PSEP will have defined new standards of safety and reliability in the industry. But to those of us here at PG&E, it represents much more.
First, this is what PG&E plans to accomplish through PSEP:

Clearly, this is a monumental – some may even say daunting – scope of work. But over two full years into the plan, PG&E has shown that it is up to the task. Since PSEP’s inception in 2011, PG&E has completed 406 miles of strength testing (hydrotesting), replaced 62 miles of gas transmission pipeline, retrofitted 133 miles of pipeline to accept in-line inspection technology (smart pigging), of which 39 miles has already been inspected, automated 81 valves, delivered material improvements in PG&E’s records processes and tools and completed the records collection and Maximum Allowable Operating Pressure (MAOP) validation of PG&E’s entire gas transmission system. And the plan will continue to be implemented for several more years. Anyone in this business will tell you that what has been done to date is an amazing accomplishment.
In order to accomplish these tasks, PG&E has hired hundreds of new, full-time employees (everything from biologists to engineers to surveyors to, yes, right-of-way agents) and has employed hundreds more in contracting positions. Entire buildings full of people manage and implement this massive undertaking. And remember, this is apart from the approximately 20,000 other full-time employees it takes to run PG&E’s normal daily operations throughout its service territory.
As I mentioned before, PSEP is also about more than numbers to us here at PG&E. It is about setting and maintaining the highest standards in the industry for safety and reliability. It is about going to work every day knowing that we are doing everything we can to provide this integral service to our more than four million natural gas customer accounts in Northern and Central California in the safest manner possible. It is, on an individual level, about being part of a team that looks at a plan of this scale and import and says, yes, we can do that, and I am proud to be a part of it.

The Chapter 2 Tour of the Bay Bridge construction project on September 26, 2012 was well attended and received. The day was perfect, not too hot or windy, for a boat ride under the bridge.

We are lucky to reside in the Bay Area, where world class projects like this are happening and accessible to folks like us.

To see a series of photos from the event, click on the link below. Thanks to our members for sharing these photos.

Chapter 2 was well-represented at the 58th Annual International Education Conference in Seattle in June. Each member of our Executive Board attended, in addition to a number of other Chapter 2 members. Seattle appears to have been a very popular destination, with a record-setting number of attendees at the conference.

Our hosts ensured it was a great event. They arranged for light rail passes for all the attendees, which allowed them to explore much of Seattle during their free time. Thank you to Puget Sound Chapter 4 and Region 7.

View some photos of Region 1 and Chapter 2 leaders from the event held in Seattle in June by clicking:  Photos

Our goals included: 1) familiarize the students about right of way; 2) discuss how the IRWA can help them in the right of way profession; and 3) expose them to other fields of real estate outside the traditional residential market.

There were approximately 30 students in the class for our presentation. The class instructor is Monique Young, a real estate broker who works for Alain Pinel. I took Monique’s Real Estate Practices class back in 2002 while I was completing my coursework for a California brokers license.

Two of the students in this class work for Contra Costa County and one works for AR/WS, both organizations being actively engaged in the IRWA. The class proved to be a source of interest to people who are already working in right of way and for those that may aspire to be in the future. What a great platform for the IRWA!

Eric made the formal presentation for our group. He educated the students about right of way, right of way projects, the allied network of professions within the right of way field, eminent domain, relocation, and the benefits of membership in a professional organization like the IRWA.

The students asked excellent questions. They were excited to learn about the many facets of right of way and fascinated to know that they can earn a living in real estate without relying on commissions. We bonded with the students further because the three of us who attended on behalf of IRWA Chapter 2 have degrees from prestigious universities, but have each attended DVC at one point.